What's Up With The Hating on "Female Geeks"?


If you spend any amount of time on the internet you probably by now have seen a lot of talk about geek girls and how they somehow are faking being geeks or something. Things came to a head when Tony Harris decided to, "speak out," against these evil women. Predictably, the internet utterly blew up. 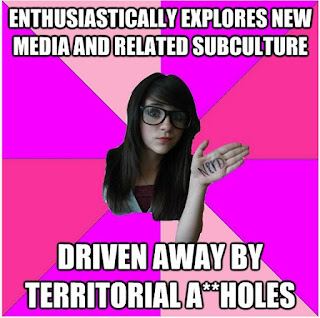 Because I want to save you going to hundreds of news stories, I shall present one that I think sums everything up quite well, the always-hilarious Comics of the Weak by Tucker Stone and friends on TCJ's website (scroll down for the bit on Tony Harris and geek-girls).

Sooooo, I don't know. Why are so many males threatened by the idea of a woman who is attractive and might also like geeky things too? I myself would love to have geeks of all races, colors, genders, and sexual orientations feel like they are welcomed under the "geek" umbrella. I just really find it odd people who talk about being hated-on for being different or weird get upset at someone else coming along and expressing an interest in their hobbies. Is it a thing of wanting to be different and weird, and with mainstream society accepting your hobby that isn't possible anymore? You want to be able to play a victim with other folk talking about how society doesn't understand your love of Spider-Man comics? Well guess what, it isn't embarrassing to read comics in public anymore so get over yourself and celebrate that super-heroes are cool now.

What I wish is that Tony Harris hadn't said such stupid stuff. I also want people to not think of geek-ery as an exclusive club but something all can join, and we need to not be jackasses.

It's not like people are actually going to act like human beings toward each other though, this is a community that sends threatening messages to reviewers when they don't like the new Avenger's movie, after-all. We need to be better.