I heard a joke about how TLC was named ironically  After all, they call themselves, "The Learning Channel," but in reality may very well be making us stupid. How else to explain some of their programs and specials which seem to all be reality shows?

The Reasonably Useful Programs.
We've got the ones that actually maybe, just maybe are teaching us something. "Sister Wives," has shown people that just because someone is a polygamist it doesn't mean they are insane and part of one of those cult-compounds. They can be just regular folk who identify as Mormons even though their own Mormon church tries to sweep them under the rug with little-to-no-respect.
"Extreme Cougar Wives," was basically silly and served no purpose other than to have the shock-value of, "Hey, look at these older women who dig younger men!" but in some of the cases you could really tell the people loved each other and that we shouldn't judge a couple just because one is much older than the other. "My Big Fat Gypsy Wedding," was 90% stupidity and fighting, but I learned a teeny-tiny amount about gypsy culture and slang so I can't totally hate on it. Even, "Abby and Britanny," was useful in that it disproved the idea that living as conjoined twins was easy--which it was made out as if everyone thought that. However, we've got the shows that really are just...wow.

What Exactly Do I "Learn" From These Shows?
When I first saw the promo for, "Best Funeral Ever," go by while watching an episode of the aforementioned, "Sister Wives," and fast-forwarding through commercials. I said, "Wait, what the hell did I just see?" and rewound the DVR. What my girlfriend and I then thought was how this could be possible?Then we watched the special itself, and I am partially convinced that TLC is running a secret contest where one of their shows or specials is fake and whomever can spot which wins a prize. How else to explain a show with a BBQ themed funeral that featured the deceased's family dipping ribs in a literal fountain of barbecue sauce while the dead guy's slow-cooker style coffin sat nearby. I'm not joking:
Then there was the Christmas-style funeral and the one that consisted of the family enjoying a day at the fair with the deceased's ashes sitting with them on the rides. That last one actually isn't too weird, the man had suffered from spina bifida and loved carnivals but never got to ride the attractions, so that is kind of sweet. Still, nothing can explain the horror I felt at seeing professional mourners practicing for the funerals by screaming, shaking, and rolling around on the pews--no, just no.
Then there is the television program I am embarrassed to admit I love as some think it signals the entire collapse of civilization. Yes, I'm talking about, "Honey Boo Boo."

Let's Discuss Honey Boo Boo! Why? Um....
For those of you who don't know, "Honey Boo Boo," is the nickname of one Alana Thompson, a child pageant star who has quite the family of characters. First seen on an episode of, "Toddlers and Tiaras," they got their own show which followed their adventures at the Redneck Games, having Christmas in July, and going to the, "mall," which is the popular name for the city dump. I couldn't make this up if you paid me to.
The show has returned as of the most recent Sunday with a number of holiday specials that were kicked off by Halloween. This new season isn't as enjoyable as the old one because I think the show is a bit more self-aware at its absurdity, whereas that first season was done with an entirely straight face this one has a hint of winking, "Yes, we know you think we're stupid," humor, and I hate that. I hate it because I liked how real the "unreality," of this family was. They were self-declared hicks and rednecks who ate roadkill and went shopping at the city dump, but also paradoxically loved their gay uncle and saw nothing wrong with his orientation, whilst also endorsing Obama during the election season. A bunch of white southerners who fit every stereotype except for being close-minded? That's kind of touching in an extremely-weird way. 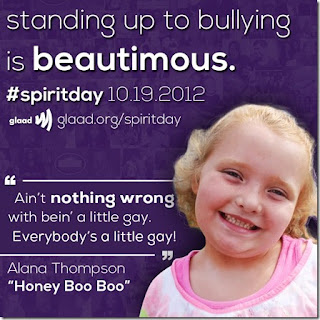 Now they are well-known celebrities however so they can't be the nondescript family they once were. "Sketti" is a household name (it is where you take spaghetti and mix it with butter and ketchup), and on numerous occasions I have heard the expression of someone who is successful, "Making Honey Boo Boo Money," because yes, they are paid pretty well for the show and could leave their house which is literally feet away from busy train-tracks. They aren't going to leave the house though, because they are America's ironic treasure. People watch them to feel better about themselves not realizing they understand we're mocking them, they just don't care because they are raking in the dough. People in other countries watch this and wonder how America can even function, not understanding this family doesn't so much represent America as it does America's deep-seated and self-loathing nature. We don't want to admit these people are a part of our country, but also can't stop staring at them as if they were a marvelous car-crash. That's why I was sad when I realized the family wasn't as real as I thought. 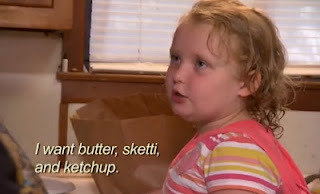 These people are "us" just as much as they aren't, and that's why I love them, or did. They are nearly mythological in their absurdity and seeming stupidity that few realize is actually them being dumb like a fox. They started out being their slightly-silly selves, but once the money started coming in they cranked the absurdity up to 11 because they were master actors at not letting us see they were in on the joke of us loving and hating them. As of the Halloween episode they've done their "tell" though. Whether it was the silly "re-enactment," of Pumpkin getting hurt or the joke-bits with Mayo showing the family clearly knows we are laughing at them and not with them, I don't know, but somehow I could tell that the magic of Honey Boo Boo was gone. The magic faded as soon as the fantasy of these people possibly being this crazy was revealed to be a, "Nah, we're just hamming it up because you're paying us so much," type of situation.
Now Honey Boo Boo is essentially a piece of performance art that everyone is a part of. People are watching the show to make fun of the family with the family knowing full well that is what's happening and happily obliging because they enjoy making money. TLC gets more and more advertisers and anytime someone makes a comment or internet post about Honey Boo Boo it just helps them whether the press is negative or positive. Yes, I am aware that as I'm making a post on this I'm now part of the problem that is the hype-machine of Honey Boo Boo. Still, this program has been both the highest and lowest point for a network that bills itself as, "The Learning Channel".

In Conclusion...Yeah, I've Got Nothing.
"What has been the point of this post?" is something you may be asking. To that I respond to you with my own question of what exactly is the point of, "Sister Wives," "Best Funeral Ever," "Honey Boo Boo," and the rest of TLC's shows? The point is to entertain, and possibly inform. Just like TLC I may have done the former but failed terribly at the latter. I guess we all just need to keep in mind that reality television often reflects only the most amped-up, twisted, and otherwise deformed versions of what we call, "reality." We often say we realize reality shows are mostly fake, but then get incredibly invested in them until someone like Alana Thompson is appearing on every talk show and television program possible.
Perhaps its all about how we like to look at things we consider different or weird, be it polygamists, older women with younger men, gypsies, conjoined twins, extravagant funerals, or southerners. The sad thing is these shows don't really teach us about these groups as much as it often makes them seem even more alien (with the exception of "Sister Wives" which actually achieves it and its family's goal of normalizing views on polygamy). What was the point of this post? Basically just to share my thoughts on TLC and its programs while hopefully keeping you entertained just as the channel has. Can we ask for much more? Probably, but no matter how much people say they want smart and sophisticated shows, "Honey Boo Boo," will still draw countless more viewers than, "Downton Abbey," so let's just shut up and enjoy some T.V. no matter how real or fake it is. We can cry about our country's culture tomorrow in a hangover-esque bout of mourning; tonight is all about fun, and isn't living for today no matter how terrible the results of tomorrow will be the true American way? Yes, sadly.
Posted by David Charles Bitterbaum at 10:38 PM